Last week, I discussed illustrations, or “drawings,” of printed media from Thomas Fella’s commonplace book with the aim of thinking more broadly about the relation between printed media, visual culture, and memory in Renaissance England. This week, I’d like to explore these ideas further by turning to the work of another English Renaissance calligrapher, Esther Inglis:

The second of five children, Inglis was born in London around 1570 to French Huguenot refugees Nicolas Langlois and Marie Presot.[2] Inglis was taught calligraphy by her mother – a “skilled scribe,” according to scholar Elspeth Yeo.[3] Inglis, like Fella, was also influenced by John de Beauchesne’s popular book on handwriting, A Booke Containing Divers Sortes of Hands (Fig. 2).[4] 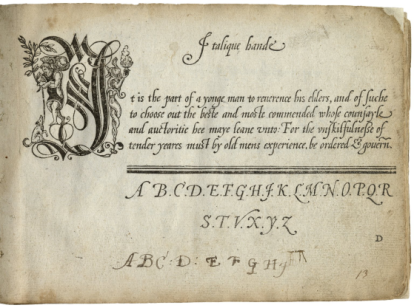